QLED and Nano Cell: What they are and why we say they can compete with the quality of the OLED? 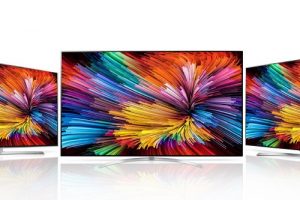 The big technological revolution in televisions last year were nanocrystals or Quantum Dots. Each brand ended up calling as he wanted. This 2017 goes a step further and comes QLED and Nano Cell, second-generation technology that Samsung and LG have presented at CES in Las Vegas with a single goal: to remove the throne of best picture quality in the high end to OLED. How do you plan to get it?

Few we doubt that the technology of fashion in televisions today is the HDR. There is no 3D here and the HDR mode of TVs is here to stay. And manufacturers focused on LED technology want to start from there to recover ground with OLED in global image quality.

Last year, LED TVs massively incorporated nanocrystalline technology to improve their image quality after a few years in that respect. They did it in the high range, right where we checked a few months ago with OLED LG E6 that for cinema, OLED still orders.

QLED technology seeks to reach OLED panels based on more accurate color, better contrast and above all more control of a high brightness with which to dazzle in the HDR mode

This year 2017 they raise the level with the recent introduced technologies Nano Cell (LG) and QLED, of Samsung, that changes the denomination SUHD that used for this technology last year. Especially in the case of Samsung, QLED can be confused with OLED, but it is not much less organic type diodes (and their problems). It’s more a question of getting more color precision and highlighting in brightness but in a controlled way.

This is how the new Quantum Dots work

Despite the change of denomination, the QLED panels are an improvement of the nanocrystals that reached the market in 2015. These tiny particles are composed of semiconductor materials that act similarly to the cells of an OLED panel (but need lighting to be activated), but without its drawbacks (they are not sensitive to oxidation or humidity, for example)

“Quantum dots” allow telescopes who use them to reproduce a wider chromatic range, deeper blacks and, in addition, consume less energy

The peculiarity of the nanocrystals is that their structure allows them to modify the wavelength of the light, reason why it is possible to obtain particles that shine in any tone of the spectrum to be excited.

The novelty of the nanoparticles of the QLED panels is that, despite the need for rear light, the activation of the pixels is performed independently, so that the desired individual on / off is obtained, which is the infinite contrast value of The OLED panels.

But it is not the only novelty of the QLED. Samsung adds a new metal coating that, in addition to better controlling the directionality of each point, there is less interference between points for greater color accuracy. Just the same as the new Nano Cell says.

Both QLED and Nano Cell leverage their technological improvements to face OLED televisions in the high range, with the theoretical advantage of a lower price. These are the key points.

With the HDR in between, the brightness plays a fundamental panel in the image quality. The new QLED and Nano Cell increase the same considerably. The QLED for example does it twice as much as last year’s SUHD models, that is, it goes from 1000 nits to 1500-2000, figures that OLED cannot compete with today.

Samsung’s QLED technology covers 100% of the DCI-P3 color space, so trendy because of how close it is to reality. Nano Cell technology also advocates for wider color ranges.

No loss of fidelity

With the new nanocrystals, it is not only more color in the right conditions, but also to maintain a fidelity that is not easy to achieve in LED panels when the brightness increases. QLED claims to have achieved it, which gives it an extraordinary value against OLED.

That the new nanocrystals do not rely solely on a crude backlight to turn on or off makes the contrast that QLED panels grow exponentially and come closer and closer to that pure black and infinite contrast with which the OLED have always impressed us.

If the image quality, both in color fidelity and brightness, does not depend on the angle with which we look at the panel, there is improvement that brings it closer to OLEDs. A better backlight system that can be directional from each pixel allows to raise the bar above the limits that until now had an LED panel.