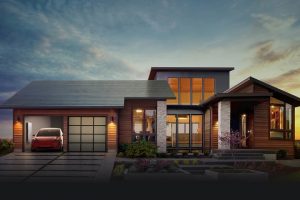 The Master Plan Part Two has officially started, and for the first time we have a home designed for solution to maximize solar energy, both to generate and to store it. 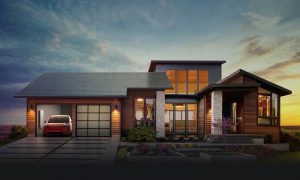 Which undoubtedly is the product most striking is the ‘Solar Roof’ or sunroof, which stems from a collaboration between Tesla and SolarCity and consist of just a roof equipped with solar cells.

The interesting thing about this solution is that it is based on individual tiles of different designs equipped with photovoltaic cells, which provide an attractive appearance and even households not seem that there are solar panels on them.

The sunroof can be as large or small as needed, and we’ll just buy the tiles and connect either the power supply or a battery, such as powerwall 2 which will be offered as part of the package sunroof. An attractive aspect is that Tesla will offer several types of tiles with different designs among which are textured glass, flat glass, slate and glass Tuscan glass, which have a wide variety to ride home and give the appearance version we want.

Another attraction of these shingles point is that according Musk are harder and more durable than traditional tiles, which can withstand strong winds and even hail. Elon Musk gave no details about the price or the date of marketing, clarified that only will be available through Tesla with installation services operated by SolarCity.

You may also like to read another article on SevenFrigo: These are the new TRENDnet security cameras to help you monitor your home or business

The second product of Tesla is the second generation of its battery for powerwall home, which changes from design to a more rectangular and thin form that can be installed either inside the home or outside, as it is resistant to extreme weather conditions.

The new powerwall two doubles its capacity to 13.5 kWh, which according to Tesla will be enough to power a four – bedroom house for 24 hours. The battery will provide continuous supply of 5 kW with peaks up to7 kW, plus it will be guaranteed for unlimited power cycles for up to 10 years.

The powerwall 2 will be available for booking in the coming weeks, will cost $5500 and deliveries are scheduled for December. With this bet predicts Tesla sell more batteries cars during 2017, as this product can be installed anywhere in the world and offers benefits that are not available anywhere else for the same price.

Finally, Elon Musk unveiled the new version of its Tesla Charger, which will support the new powerwall 2 further that improves recharge time for Tesla vehicles by 40%.

In the coming days the price and date of availability of this new car charger Tesla announced.