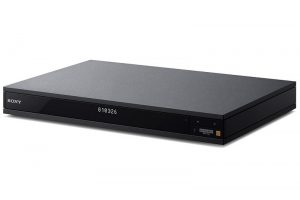 Over a year ago it unveiled the logo and specifications of the physical format which would replace the Blu-ray, which they refused to break the head and christened Ultra HD Blu-ray. This is an important advance for domestic consumption content to exploit technology, where the support HDR stands and a better quality sound to most recent.

Panasonic and Samsung were the first to raise his hand to announce Ultra HD DVD Blu-ray, and now it’s Sony who is finally announced its first device that will support the new Blu-ray discs 4K. Something we expected to happen with the arrival of the new PS4 Pro, but finally it was not, which made the company was strongly criticized.

The new player UBP-X1000ES Sony has a design that does not come out of the conventional and maintains that line we’ve seen in all products of this type. Its main feature is the physical support new Ultra HD discs Blu-ray, where curiously Sony Pictures was among the first to announce the release of several films in this format, something that also Warner did at the time.

This player will support Blu-ray, DVD, CD and SA-CD, but it is within the support UHD where we find the greatest number of benefits, such as 4K resolution at 60fps with HDR, DAC 32-bit audio in high LPCM resolution up to 192 kHz and DSD to 11.2 MHz, and two HDMI 2.0a outputs HDCP 2.2, one for audio and one for video, so that compatible TV to enjoy the best picture and sound quality.

You may also like to read another article on SevenFrigo: Sony makes the leap to the 100-inch 4K HDR in its new range of TV ‘Bravia Z’

Of course, it has WiFi and Ethernet connectivity, so you can enjoy streaming video 4K through services like Netflix, Amazon Video and YouTube, plus it will provide image scaling for both physical supports 1080p and digital via the Internet.

The bad news is that so far advertised its availability only for the United States in the spring of 2017, plus Sony did not want to announce the price at the moment, but seeing that it is a device belonging to the high end of the company, it is estimated that its price is not less than $500. Maybe that’s why they would not put a player Ultra HD Blu-ray in the PS4 Pro.

The Blu-ray 4K player was not all that Sony presented at the Expo CEDIA in the city of Dallas, and also took advantage of the event to display an impressive projector with support for Ultra HD in HDR based on Hybrid Log-Gamma (HyLG), which the company says can provide unprecedented image quality up to 90 inches.

The VPL-VW675ES has WiFi connection to access streaming services to enjoy 4K content, plus two HDMI 2.0a HDCP 2.2 ports if we want to connect to another device to remove the video and audio signal. We find a lamp that will offer an impressive brightness of 1,800 lumens, dynamic contrast of 350,000:1, and a life of up to 6000 hours in low power mode.

This little baby will be priced at $15,000 and will be available during the month of November.