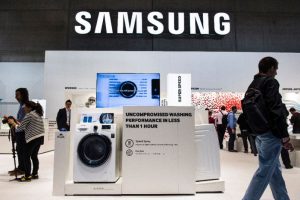 No, 2016 is not Samsung’s best year, let alone. We do not say the figures, but because the problem with the Note 7 is not the only nor the last of this year. Now notice has jumped with certain models of Samsung washing machines that have asked to be removed in the United States.

In this case time they have been reported 733 units , as shown in the request of the CPSC, with a total of 34 models affected (whose list can see in the request). These are not just recent, since the older ones were launched in March 2011 (although it affects units sold until this same month that starts now).

Failure? Well, here’s déjà vu, because it has appeared the word “explosion”. As we said the request for withdrawal or recall not part of the brand itself, as happened with the phones, but the CPSC is making the call the users to communicate with the manufacturer to manage the procedure. This was explained by Elliot Kaye, representative of the CPSC.

We are talking about a serious threat because the top of the washing machine is flying.

Among the cases have been reported some cases of injured users, for example the case of broken jaw which reports the WSJ. In ABC picked up the case of Melissa Thaxton who narrowly avoided the accident, he explains, describing the washer “suddenly exploded” without there being signs that there was a problem and talking about a very loud sound of explosion.

Thus, the CPSC does not specify a procedure to be followed, but gives the option of being:

At the moment it is soon to know the economic cost of this product recall, but what is clear is that it probably arrives at one of the worst times and the cost in reputation will be higher than expected for the Note 7 incident.